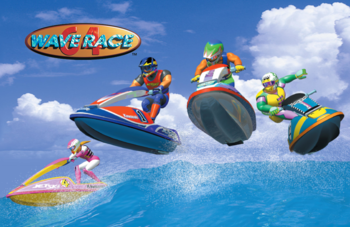 Wave Race is a series of jet ski racing games by Nintendo, first originating on the Game Boy in 1992. Wave Race 64, released for the Nintendo 64 in 1996 (and later on the Wii Virtual Console in 2007), is the best known and most well-loved of the lot of them. Wave Race: Blue Storm, released as a launch title for the Nintendo GameCube in 2001, is the most recent release.

64 was notable in its use of very realistic wave physics, which use up approximately 80 percent of the system's power. It was also the first game to utilize the Controller Pak for exchanging vehicle settings and time tables between cartridges.note Most third-party games, however, used the Controller Pak to save game progress instead of on the cartridge itself as a cost-cutting measure while Nintendo themselves seldom used it outside of two more games. Blue Storm is known for its waves being affected by the constantly changing weather, adding more depth to its races.

64 was re-released in 2007 on the Wii's Virtual Console service, and was later released on the Wii U in 2016. In August 2022, it was added to Nintendo Switch Online's library of Nintendo 64 games. To day, the series has lied dormant for over two decades. Ryota appears in Super Smash Bros. Ultimate as a spirit, which is the series's most recent reference in any Nintendo game.