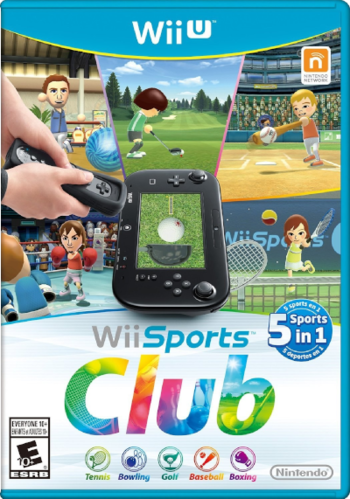 Wii Can Show U How to Play.
"...but can it run Crysis?"
— Gamer (and hardware) in-joke
Advertisement:

Whenever some new technology comes out, companies want to find ways to market their product. The best way to do it is to show it off. This usually happens in the PC hardware world where graphics card vendors put out tech demos to show it off. Or in an environment that's limiting such as video game systems, smartphones, and tablets, a proof of concept to show that hey, that piece of hardware really can do it.

And what a better way to show off the technology by having users interact with it in a fun way. This is where the Tech Demo Game comes in. It can be loosely described as a tech demo disguised as a game. But this isn't like an Obvious Beta, the developer tried in earnest to make a fully functional game that plays relatively well. What qualifies as a tech demo game however, is one of the three:

This Trope can have a Sliding Scale effect regarding how much of a tech demo it is versus how much of a game it is. While all of the examples below have something new and exciting that they're trying to show off, having progression, unlocks, variety, story, a fair length, and a series of levels that string together can help make it feel more like a game. The demo-est of tech demos meanwhile are often just a collection of five or so barely-related minigames focused around a particular gimmick.

Note that this trope has nothing to do with the respective quality of a game: many games started with the motivation of being a tech demo end up as extremely well received classics for much more than just their technical aspects. On the other hand, games that prioritize new technology at the expense of other aspects like gameplay or story may find themselves forgotten or even Condemned by History as their technical innovations are inevitably surpassed.

open/close all folders
Arcade
Before the PC positioned itself in the 2010s as the high performance gaming platform of today, arcade games were well-known for being capable of doing things that consumer hardware couldn't do, or at least without being prohibitively expensive for consumers. From the manufacturer's perspective, their large physical size makes it much easier to just cram tons of big iron in a fridge-sized cabinet instead of having to spend billions of dollars developing a pint-sized graphical powerhouse; from the owner's perspective, it's OK to pay thousands of dollars for a single arcade machine if said machine will generate revenue and eventually pay itself off, especially if it's a highly attractive-looking game with crowd-drawing next-generation graphics; and for the final customer, the comparatively low price of a single arcade credit makes next-generation graphics so much more accessible to the player.

While consoles and PCs of today can match arcade games in terms of performance, and modern arcade games use PC-based architecture, modern arcade games can still provide an experience that's impractical or expensive to replicate at home. After all, what sounds more attractive to the average consumer: Going to an arcade to try the latest game with killer graphics and unique controls for $1, or spending $600 on a specialized controller (the alternative being extremely clumsy controls on a standard controller) for a game one is not sure of just yet?
PC
After the arcade market fell out of fashion in the Western hemisphere starting the 2010s, the PC evolved to fill the void left behind by the powerful arcade machines. Unlike consoles, which are developed as one single monolithic device that can only be purchased whole, high performance PCs are typically purchased by their individual components and then assembled together; as a result, companies can focus all their individual resources towards developing extremely high-performance models of one specific piece of hardware, all of that while simultaneously keeping a comparatively low barrier for the final customer to enjoy next-generation graphics (if your CPU and RAM are decently powerful, you can purchase a graphics card that doesn't cost much more than a current generation console yet greatly surpasses them in pure graphical power). The large size of a standard ATX PC and its roots as a business machine mean the PC typically has much better ventilation and more room for big iron infrastructure than a console — the heat caused by raw horsepower and the large amounts of electricity it requires are simply not a concern when water-cooled GPUs, 20 cm case fans and kilowatt power sources are available.

Whereas consoles have tightly sealed and locked architectures that do not allow any programming outside of their official frameworks, the PC is a wide open architecture where the developer can even directly control both CPU and hardware with assembly code. And on top of that, whereas developing a game for future consoles is impossible because console technologies change dramatically with each new release, developing a game for future computers is possible, because computer technologies can easily remain with active support for as long as 10 years — running a PS2 game on a PS4 Pro is impossible without an emulator, but running a Windows 7 game on Windows 10 with no special configuration is usually still possible. These factors combined have led many PC game publishers to develop games specifically intended to squeeze all the power a PC can deliver — in some cases, even going as far as making games intended to be run on hardware from 5 years and onwards.
Console
Nintendo Consoles

VR
While the early years of VR were experimental enough for any game to arguably qualify, there are some that apply in specific ways more than others.
Handhelds
Nintendo Handhelds