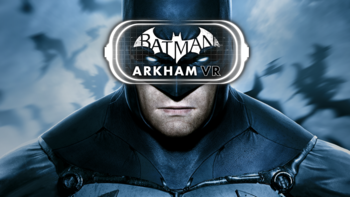 Batman: Arkham VR is a Virtual Reality game taking place in the Batman: Arkham Series, after the Joker's plot in Batman: Arkham City, but before the events of Batman: Arkham Knight. Playing through the game, however, complicates its relation to the others in the series.
Advertisement:

Controlling Batman, the player navigates their way through the Caped Crusader's investigation of Dick Grayson's (Nightwing) tragic murder and the disappearance of Tim Drake (Robin). It has been released for both Playstation VR and on PC (where it utilizes the Oculus Rift and HTC Vive instead).