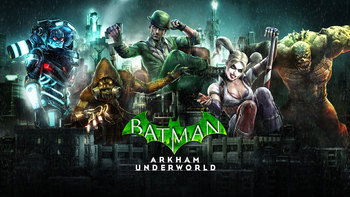 Batman: Arkham Underworld is a Clash of Clans clone set in the universe of the Batman: Arkham Series. It's a Real-Time Strategy iOS and Android game. Initially, taking place after the events of Batman: Arkham Origins, unlike the other Arkham games, which have the player play as Batman, it has the player control the various super villains in Gotham City like The Riddler, Catwoman, Harley Quinn, and Bane as they take over the Gotham underworld from The Mafia. Later DLC takes place after Batman: Assault on Arkham and features Amanda Waller task Deadshot (who was stopped from killing Waller by Batman) and Harley with a mission.