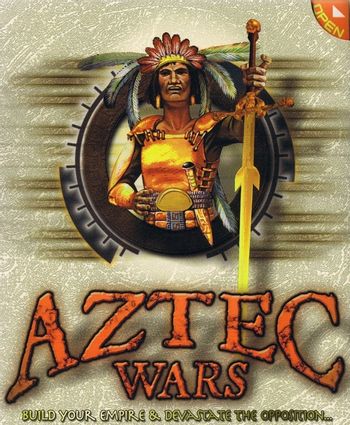 An obscure Russian Real-Time Strategy game from 1999 (but not released abroad until 2 years later), Aztec Wars takes place in an Alternate History where the Aztec empire has crossed the Atlantic sometime before being conquered by Europeans, and promptly conquered pretty much all of Europe and Africa, thanks to its armies composed of fireball-tossing priests, tamed jaguars and mechanical Spider Tanks, among other things. Standing against the Aztec are the Russ (the only nation with a campaign), with their war bears and axe-tossing tanks, as well as the army of China, which includes yogins with Psychic Powers, yetis, and a slew of ridiculously advanced Steampunk machinery.

Yeah, it's that sort of game.

Aztec Wars never really achieved a success, and was criticized for its simplicity compared to other RTS's of the time, as well as poor graphics. But it sure has some catchy music.

Tropes exemplified by this game: