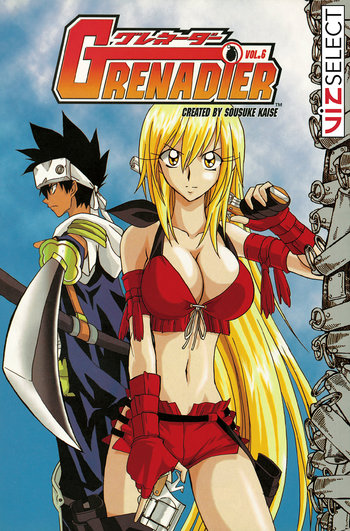 "The ultimate battle strategy: To avoid battle by removing an enemy's will to fight."
— Empress Tenshi
Advertisement:

Grenadier is a manga series written and illustrated by Sōsuke Kais, which ran in Monthly Shonen Ace from 2003 to 2006. It received an anime adaptation in 2004, produced by Studio Live and Group TAC and directed by Hiroshi Kojina.

Based in an alternate version of Japan's civil war period, this is the story of the travels of Rushuna Tendo, a buxom young woman possessing astonishing skill with a revolver. Known as a senshi, or firearms expert, Rushuna is on a personal journey to bring peace to the land. Uncomfortably aware that shooting people is not the best way to accomplish this, Rushuna is struggling to master the peaceful teachings of the Empress Tenshi. Accompanying her is Yajiro Kojima a.k.a. Yatchan, a skilled samurai who has grown weary of battle and sees value in Rushuna's goals. Also along for the ride is Mikan Kurenai, an orphaned balloon artist who has painful memories of her own to deal with.

Learning that there is a price on her head, Rushuna journeys back to the Capital to clear her name. Pursued and watched by a mysterious man in a clown mask, Rushuna must battle the Juttensen or Ten Heavenly Enlightened one by one, each armed with strange and deadly weapons. She gains allies as she travels, beating her enemies with her skills and winning them over with her purity, trying to learn more about the mysterious Jester and to understand the Empress' strange actions.

The original manga version has a plot far differing from that of the anime adaptation, with Rushuna trying to find her homeland, editing the backstories of some of the major characters (including turning her evil counterpart into an adoptive sister, and the Iron-Masked Baron into a nutjob capable of making Hitler look sane), and turning the world they live in into a post-apocalyptic scenario, except it's been so long after it that the ancient super weapons are buried deep and the world is somewhat flourishing.