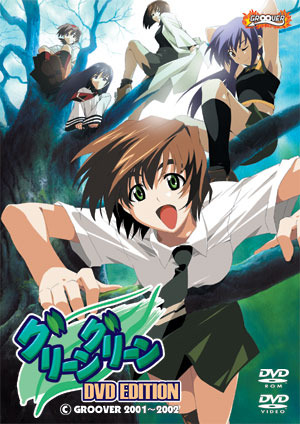 Green Green is an anime series, adapted from an H-Game and a light novel of the same name. It is set in Kanenone Gakuen ("Sound of the Bell Academy"), an isolated all-boys Boarding School at the start of the story. However, the Powers That Be send them a busload of girls to make it co-ed. The first girl off the bus is Midori Chitose, who pounces on Ordinary High-School Student Yuusuke Takazaki saying she's in love with him. Yuusuke has no idea who Midori is, but Midori thinks they were lovers in a past life.

Yuusuke's closest friends at school are the Baka Trio - a Comic Trio that supplies the perversion to match the nudity supplied by their new female classmates.