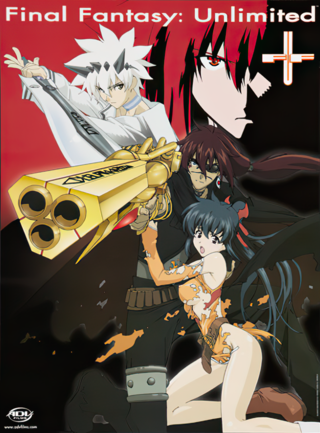 "Welcome to the night of Wonderland."
— Fabula
Advertisement:

Final Fantasy: Unlimited is, as the name implies, an anime series produced as part of the mind-flayingly popular Final Fantasy franchise. It was produced by GONZO, and brought to the United States by ADV Films; it's available to the Spanish-speaking audience in a subtitled version, and has also been dubbed in French and German. Like many Gonzo anime, Final Fantasy: Unlimited is often guilty of using dodgy CG effects (though it uses said CG better than many other Gonzo productions) and varying art quality depending on which studio is working on each episode.

Originally planned as a two-season anime with an open-ended finale to allow for a third season if it was well-received, Final Fantasy: Unlimited actually had the opposite problem: it did not achieve sufficient ratings or video sales to have its second season produced. The unanimated plotline was instead released in two voiced dramas, a book, and several short stories released on the official website—none of which were made available in a language other than Japanese. That didn't stop the non-Japanese fans from piecing the rest of the story together through unofficial translations and summaries anyway.

Final Fantasy: Unlimited tells the story of a pair of twins from the real world, Ai and Yuu Hayakawa, who journey to a bizarre parallel dimension in search of their parents, a pair of scientists who've made a living off said parallel dimension and went there to investigate it... and never quite made it home. Along the way, they and the friends they find there discover a great deal about Wonderland's troubles, which might actually present a threat to the real world as well. Being a Final Fantasy story, the villains are affiliated with an Eldritch Abomination known as Chaos. And Chaos is battled by existences known as the Unlimited, who are said to be more powerful than gods.

What does this have to do with Ai and Yuu, who just want to find their parents and go back home? Well, maybe more than anyone would like.

Final Fantasy Unlimited now has a character sheet, but at this time it is not complete.