Transformation Is a Free Action 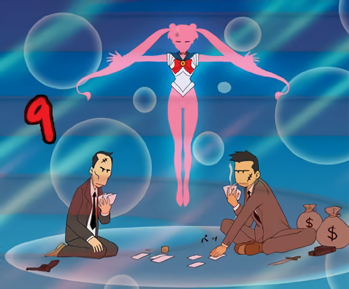 Why are you just standing there? She's totally going to kick your ass when she's done transforming. Oooooh! You're doing that thing where you're being uncharacteristically chivalrous even though you just murdered her entire defenseless family for some cheap laughs. Well, it's your funeral, buddy.

This is where a character will obligingly wait for another character to finish his transformation before proceeding to bloody murder. This is separate from a Transformation Sequence in that while the sequence can be ignored, in this case it IS ignored.

Characters may have several reasons for doing this.

Whatever the case may be, it ultimately comes down to the character being Genre Blind, and it rarely works out in their favor. Overall, whether you're okay with this trope or not reflects your stance on Willing Suspension of Disbelief.

Even if the villains attempt to attack the hero mid-transformation, usually a magical barrier of some sort knocks weapons, attacks, and even bodies away. This most commonly happens with the Henshin Hero, though there are a few other examples outside of this.

Works that don't normally feature a Henshin Hero as a protagonist sometimes parody this by having a nameless extra being shot and killed in the middle of transforming. When a straight example of a Henshin Hero subverts this trope however, it tends to take the form of making the initial triggering of the transformation the part that can be interrupted instead of the sequence proper, so whilst the transformation itself is a free action, pulling out the Transformation Trinket and activating it isn't.