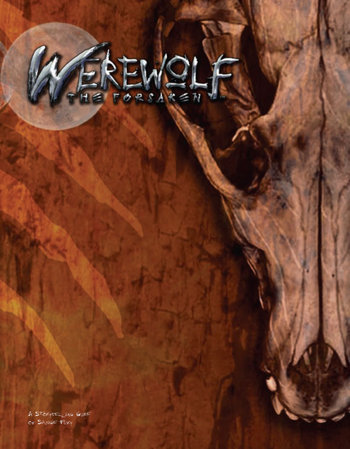 Unleash your animal side.
Advertisement:

Werewolf: The Forsaken is the second game in the Chronicles of Darkness line and the spiritual sequel to Werewolf: The Apocalypse.

This story is true.note That's the Uratha equivalent to Once Upon a Time, by the way Long ago, the physical world — the Gurihal — and the Spirit World — the Hisil — were one world, named Pangaea. The great spirit Father Wolf patrolled Pangaea, ensuring that spirits were kept in line and did not terrorize humanity. The first werewolves—beings part spirit and part human—were Father Wolf's children via the moon spirit, Luna, and were his followers and fellows in arms. But Father Wolf grew old and weak, so some of his children rose up and killed him (ostensibly for the greater good), and then all hell broke loose: The spirit world and the physical world were forever separated, and the descendants of the werewolves who struck down their own sire now inherit a grim legacy.

Werewolf: The Forsaken is about playing one of the titular Forsaken — werewolves who threw away the closest thing they had to paradise. Their role is to serve as "border patrol" to the Spirit World, keeping voracious spirits from meddling with human affairs. At the same time they must war with the descendants of those ancient werewolves who were not complicit in the death of Father Wolf and who still regard the Forsaken as traitors and outcasts. It's a hard, bloody, and usually short-lived experience... but someone has to do it.

Werewolves, as the children of the moon spirit, take their calling in life from the phase of the moon their power and personality are most closely linked to, also known as Auspices:

The Forsaken band together into tribes, loose sociopolitical groups who share the same patron spirit: the fierce warriors of the Blood Talons, the shamans and spirit walkers of the Bone Shadows, the hardy and bestial scouts and explorers of the Hunters in Darkness, the urban and cosmopolitan wielders of human technology and society of the Iron Masters, and the generals and high kings of the Storm Lords. The antagonistic Pure werewolves have tribes as well: the zealous fanatics of the Fire-Touched, the cold and manipulative Ivory Claws, and the hunter-warrior gladiators of the Predator Kings.

The game presents a nest of unsettling dilemmas for characters: They grew up believing themselves to be human, but now find that they are part of a larger and more dangerous world where the human way of acting (and feeling) can be a detriment. They've inherited a legacy and blood-war not of their own making but which poses a dire threat to themselves and everyone around them anyway. And they have the unenviable job of navigating and policing a strange and alien world of totally inhuman entities who by their nature resent and fear them. The only thing they have to rely on is each other... if that?

While not officially a "limited cycle" like the later lines of Promethean: The Created, Changeling: The Lost and Hunter: The Vigil, Werewolf did have the fewest official sourcebooks of an "unlimited cycle" (like Vampire: The Requiem and Mage: The Awakening) released before White Wolf declared they were giving up traditional print for PDFs and print-on-demand.