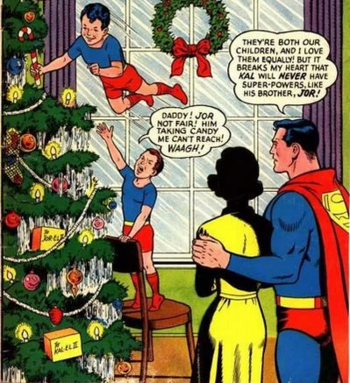 One's a late bloomer, the other a sonic boomer.
"It happened sometimes, though rarely, that a True Being never developed a special gift."
— Children of Magic
Advertisement:

Children of superparents get superpowers... except when they don't.

If you're a protagonist, this is no problem, you'll usually become a Badass Normal or at least an Unfazed Everyman. But if you're a Mauve Shirt… you'll probably become this.

This trope is a character who's in on The Masquerade, and was born into their world. Unfortunately for them, they're normal. No, not Badass Normal; totally, completely, and 100% normal. If the lame power of Heart was a consolation prize, the Muggle Born Of Mages never got a draw at the Superpower Lottery in the first place. They're just as ineffectual in adventuring as any other muggle, maybe even more, which is why they usually find themselves having some grunt-work position in the world of the masquerade, such as a janitor, secretary, or The Igor. However, if they're still determined enough to throw themselves into the world of magic or what-have-you despite lacking innate abilities, they might have the opportunity to become a Muggle with a Degree in Magic. Most examples of these characters tend to have bitterness and regret over not being a super as a major character trait, though there are some who are actually at peace with their lack of special abilities; in that situation, any bitterness the character may feel comes from everyone else refusing to understand/accept/believe that they're perfectly content with their lot in life.

It may ultimately turn out that this person actually has some form of Anti-Magic, though this might not be noticed immediately. If this is common in the setting, it may be that characters are completely Randomly Gifted, so powers aren't always inherited and may spontaneously manifest to children of Muggle parents. If this happens gradually over several generations it's Generational Magic Decline.

If everyone except this person in the setting is a mage, they're an Un-Sorcerer.

This trope is somewhat Newer Than They Think, since magic-users traditionally learned/sold their soul for their powers, meaning no one expected a mage's child to be anything but a regular human.

Compare Muggle in Mage Custody, when a muggle is a ward or a slave to a mage, and High Hopes, Zero Talent, when a character wants to be something, but has no aptitude for it. Contrast Almighty Janitor and the Badass Normal. Compare Un-Sorcerer, Recessive Super Genes and Unfazed Everyman. For an inversion, see Mage Born of Muggles.