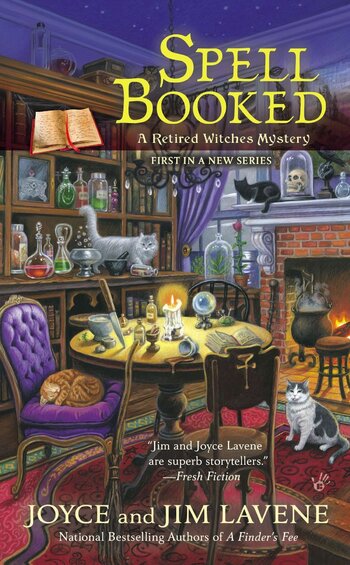 Retired Witches Mysteries is an armchair/amateur sleuth/Cozy Mystery series by Joyce and Jim Lavene. The series features Molly Addison Renard, Elsie Clarrett Langston, and Olivia Dunst, a coven of three older witches who run the Smuggler's Arcane shop in Wilmington, North Carolina, hiding their witchy nature in plain sight. With their powers fading from age, the trio are looking for three new witches to take over and inherit their ancestral spell book, so they can retire to Boca Raton. But when Olivia is suddenly murdered (and returns as a ghost, to the disapproval of the Grand Council of Witches) and their spell book stolen, the three must work with new coven member Dorothy Dunst Lane (Olivia's long-hidden daughter) and initially reluctant ally Brian Fuller to solve the crime... and then some others that pop up involving witches.

It was the last series created by Creator Couple Joyce and Jim Lavene, with the third book being published posthumously.