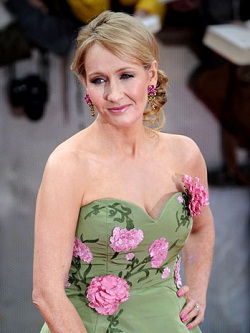 "I would like to be remembered as someone who did the best she could with the talent she had."
Advertisement:

Joanne Rowling, OBE (born 31 July 1965), better known by her pen name J.K. Rowling,note She has no middle name, but was advised by her publisher to use initials so as not to steer young boys away from reading a book written by a woman; she adopted Kathleen from her paternal grandmother is a British writer, most notable for being the author of the Harry Potter heptalogy. She is one of the richest and most influential women alive today, with the distinction of being the first US-dollar billionaire exclusively through writing.

Rowling's life story is also famous — at least the Potter-related details of it.

The initial idea for Harry Potter "fell into her head" as she was riding on a train; even though the idea seized her, she had nothing on which to write and was too shy to ask a stranger to loan some paper. Early on in the writing process on Philosopher's Stone, Rowling's mother passed away, which "changed her world and Harry's forever", intensifying Harry's feelings of being orphaned.

Further intensifying Harry's loneliness is the fact that Rowling was poor when she began writing; she and her baby girl lived on food stamps at a time of high government cuts. The oft-spread image of Rowling writing in a cafe is one born due to the fact moving was the easiest way to make her daughter fall asleep, and she would duck into the nearest cafe to write. She has repeatedly refuted the persistent myth that she did so because her apartment was unheated, such as in this interview

After that, history took its course. Harry Potter is one of the biggest brands in existence today; in an age of Internet, video games and mass television saturation, Harry made reading cool again. This may be Rowling's most important contribution of all.

Rowling has developed a Signature Style (though, apparently, she's also good at hiding it). If you're reading one of her books, expect a story set 20 Minutes into the Past with an Intro-Only Point of View, a Plot-Triggering Death, Loads and Loads of Characters with Meaningful Names (just don't get too attached to them), Said Bookisms, generous lampshaded Narm, and plentiful Foreshadowing for her overstuffed Chekhov's Armoury.

Rowling's first post-Potter book was The Casual Vacancy, released on 27 September 2012 and marketed as her "first novel for adults." After mixed reviews, Rowling followed up with The Cuckoo's Calling, a crime novel starring hardboiled P.I. Cormoran Strike. This time, she published under a pseudonym, Robert Galbraith, and stayed under the radar for four months before being outed. A sequel, The Silkworm was published in 2014, still under the pen name. Three more novels in the series have since been released.

On 12 September 2013, Warner Bros. announced they will produce a new series of Harry Potter Spin-Off films based on Rowling's Fantastic Beasts and Where to Find Them, with the book's fictional author Newt Scamander as the protagonist. It takes place in the same world as Harry Potter, but set 70 years before the events of the first book. Rowling wrote the screenplay for the first two films by herself but Steve Kloves was brought on to help her with the third as a co-writer, though he’d helped enough with the first two to get a producing credit. The series is set to have five instalments with three having been released so far.

Since late 2019, Rowling has attracted controversy as a result of her vocal opposition to self-identification for transgender people in her essays and on social media, which has led to some fan sites and Harry Potter cast members (such as Daniel Radcliffe and Emma Watson) distancing themselves from her opinions.

Also in 2020, she published The Ickabog, her first children's book unrelated to Harry Potter.