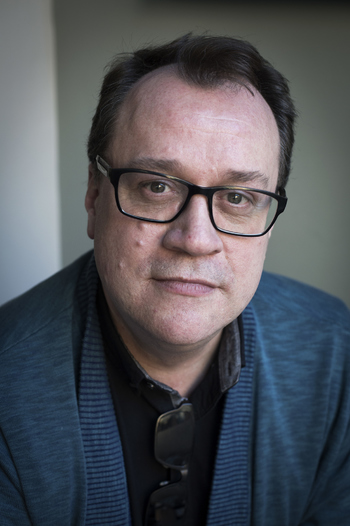 Quel dommage, Davros!
"Saving it from extinction."
—Frank Cottrell-Boyce, when asked what Davies' greatest contribution to British television was.
Advertisement:

Stephen Russell Davies (born 27 April 1963 in Swansea, Wales), better known as Russell T. Davies, is a British producer and screenwriter, born in Swansea. He added the T to his name because there was already a Russell Davies in UK media.

Known as RTD (or sometimes "Rusty") by Whovians, he has a penchant for naming characters "Tyler" and/or "Smith". He also tends to inject Camp and Technobabble in very large doses, and his characters are highly likely to be bisexual.

Originally from a background in children's TV, he wrote and produced a number of adult dramas between the mid 90s and the revival of Doctor Who in 2005, most notably Queer as Folk, and soon became one of the most influential and popular TV writers in the UK.

He was one of the executive producers on Doctor Who, along with Mal Young, Julie Gardner and Phil Collinson. RTD, however, was in charge of the creative aspect and is the "showrunner" as a US person would think of it. He is responsible for the revival of Doctor Who in 2005, and he also created its spin-offs Torchwood and The Sarah Jane Adventures.

Davies has written several Doctor Who episodes and specials over his tenure as producer, and been responsible for rewrites on many more. He stepped down from the position following the conclusion of production on the David Tennant era, handing the reins to Steven Moffat. He is currently set to return to the position in 2023, after the departure of Moffat's own replacement Chris Chibnall.

Master of the Wham Line and the Wham Episode: in his five years on Doctor Who, he was infamous for leaving the penultimate episode on a massive cliffhanger to whet appetite for the finale. He's also critical of TV executives using "Tonight, Someone Dies" and similar catchlines in commercials and claims that it impacts ratings — and admittedly, he has a point.

Liberally uses Author Appeal, and as a result, placed Wales firmly in the centre of the Whoniverse alongside London. Also became famous for finally upgrading all the invokedHo Yay subtext in Doctor Who to proper TV canon, for abolishing No Hugging, No Kissing in the series forever, and for dialing all of the above — Wales, Ho Yay and tons of sex — Up to Eleven and beyond in Torchwood.

He is also known for being obscenely tall, standing at 6'6" (198cm). To wit, he once relayed a story of a casual talk with a taxi driver he once had, during which he mentioned he was working with Doctor Who, to which the driver asked if his job was playing one of the monsters.

Tropes applying to him:
Recurring and over-arching tropes in his Whoniverse work (Doctor Who, Torchwood, The Sarah Jane Adventures and the Virgin New Adventures) :
Tropes in and shared with his other works: