Literature / Harry Potter and the Chamber of Secrets 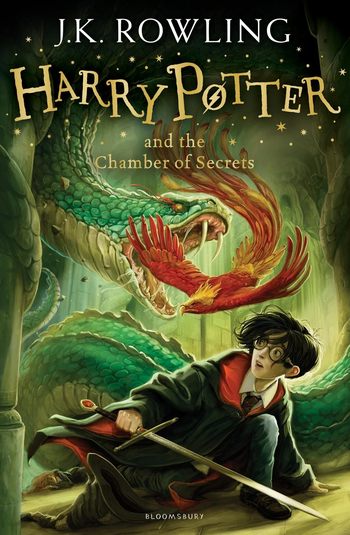 Enemies of the Heir, beware...
"It is our choices, Harry, that show what we truly are, far more than our abilities."
— Albus Dumbledore
Advertisement:

Harry Potter and the Chamber of Secrets is the second book in the Harry Potter series, published on July 2, 1998.

The main plot involves the Chamber of Secrets, a hidden chamber within Hogwarts built by Salazar Slytherin. A big fan of Fantastic Racism, Slytherin built the Chamber to house a monster which can only be controlled by his heir and which is intended to attack all those, mainly Muggle-borns, whom he considered "unworthy to study magic". Now, someone has opened the Chamber, implying the Heir of Slytherin has returned to Hogwarts, but who is it?

You may have noticed this storyline has rather little to do with the overall Story Arc. While the books were still being written, Chamber was accused of essentially being devoted to a Wacky Wayside Tribe for this reason. In reality, the book is actually an Innocuously Important Episode, and introduces a major Chekhov's Gun among other bits of Foreshadowing for several later books, particularly Harry Potter and the Half-Blood Prince. Indeed, as J. K. Rowling was still a freshly-starting-out author, her editors made her remove some parts she wanted to leave in, and so she had to cram them into book six.

Followed by Harry's third year at Hogwarts, in Harry Potter and the Prisoner of Azkaban. It was adapted into a film released in 2002.

Tropes exclusive to this book or at least especially prominent in it: