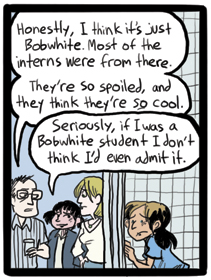 "You can hear everything if you're in there long enough."
— Janeece Bryant, Waterloo Road
Advertisement:

Whether it's a school, office, courtroom or even space ship, people love to Trash Talk about co-workers, peers or "the plan" in bathrooms. Of course, who else should be sitting quietly in the stall nearby than the person being discussed?

The usual set up for this goes like so: Alex is doing his business in a stall, when who should walk in but Charlie and Bob. Both of them start trash-talking Alex. Their conversation might not even be mean spirited, but simply flaws they wouldn't bring up in person that burst Alex's bubble. Or they assume that he's not out there and feel they can talk without consequences. After an earful, Alex will likely do one of four things:

Compare Right Behind Me (another situation where Charlie and Bob are unaware of Alex's presence), and What You Are in the Dark (a person's private behavior differs from their public behavior). Sometimes turns out to be Out-of-Context Eavesdropping.

Jerry, in a stall, overhears fellow aliens mocking him and his wife.

Jerry, in a stall, overhears fellow aliens mocking him and his wife.