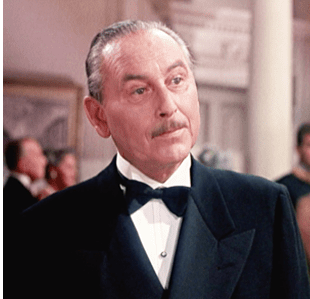 Wright in The Sound of Music.
"I rather imagine they wanted my British voice to contrast the American voices of the Earth people, to more clearly and easily differentiate them. I was originally to play the part, as well, but when they tried to fit me into the alien mask, they found my head was too big. Like most actors, I suppose."
—Ben Wright explaining how he came to voice (but not physically play) the Luminoid Authority in The Outer Limits (1963) episode "A Feasibility Study" (from David J. Schow's The Outer Limits Companion)
Advertisement:

born in London to an American father and an English mother, Wright was appearing in West End theatrical production by the mid-1940s. During World War II, he served in the Kings Royal Rifle Corps. In 1946, he made a life-changing trip to America to attend a cousin's wedding, which inspired him to move to Los Angeles and join the American entertainment industry. He started out in radio, where he played roles ranging from Sherlock Holmes to Hey Boy the Chinese bellhop in Have Gun – Will Travel. As his filmography shows, he worked extensively in both television and films for several decades.

He was married to director/actress Joan Kemp Welch and Muriel Louise Roberts and had two children with Roberts.