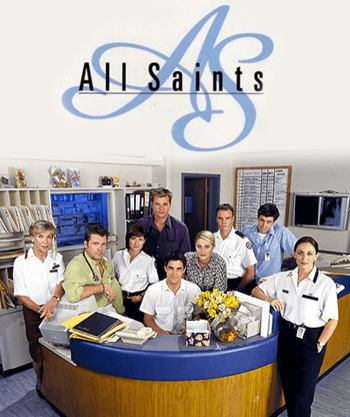 All Saints is an Australian Medical Drama series created by Bevan Lee and developed by Jo Porter, which ran on Seven Network for 493 episodes over 12 seasons, from 1998 to 2009. The series was set at the fictitious All Saints Western General Hospital, in Sydney's Western suburbs.

Initially, the series revolved around Ward 17 (nicknamed the Garbage Ward because it took the overflow from other, more specialised wards), and the nursing unit attached to it, managed by Sister Therese Sullivan (Georgie Parker). In 2004, the series received a retool, with Ward 17 closing, several characters being written out and Terri and her surviving staff being transferred to the Emergency Department, under Dr. Frank Campion (John Howard). A second retool followed in 2009, with a new focus on rescue operations in the field and the show being renamed All Saints: Medical Response Unit. The series ended in October that year with the resignation of Von Ryan (Judith McGrath), the only main character remaining from the first episode.

All Saints provides examples of: