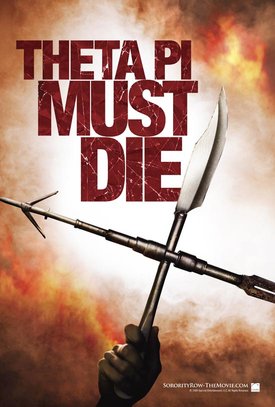 Sorority Row is a 2009 film about the ragtag bunch of dumb, promiscuous sorority sisters of Theta Pi who, on the night of one of the biggest sorority parties of the year, plan to prank Garrett, the ex-boyfriend who dumped their friend Megan (Audrina Patridge) for another woman. They plan to do so by telling Garrett that Megan overdosed on a drug he gave her and died, with Megan faking death herself. Of course, shit happens and Garrett kills Megan, taking the suggestion of one of the girls to stab her with a tire iron and dump her in a lake inside a mine so nobody finds out. Everybody pledges to never reveal the details of Megan's death, so obviously somebody finds out, I Know What You Did Last Summer-style, and starts killing off each of the sisters (and Garrett) using the same tire iron used to kill Megan in a fit of revenge, presumably because it would make the killings more ironic.

A loose remake of the Cult Classic horror film The House on Sorority Row.