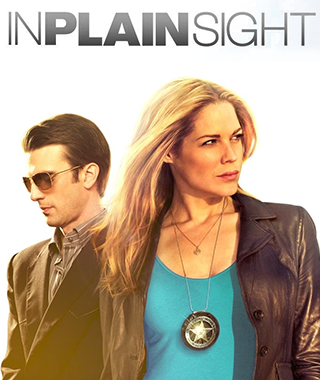 "Since 1970, the Federal Witness Protection Program has relocated thousands of witnesses, some criminal, some not, to neighborhoods all across the country. Every one of those individuals shares a unique attribute, distinguishing them from the rest of the general population. And that is, somebody wants them dead."
Advertisement:

In Plain Sight is an American Crime and Punishment Series television series that premiered on the USA Network on June 1, 2008 and part of the Law & Order Shared Universe. The show features US Marshal Mary Shannon (Mary McCormack) and Marshall Mann (Fred Weller) who work with people in WitSec (Witness Protection) in Albuquerque. This leads to them sometimes having to uncover crimes, track down killers, work at protecting them, etc., in addition to somewhat nannying their clients. Their boss Stan McQueen (Paul Ben Victor) likes to stick to official WITSEC doctrine as often as possible but will still stand up for both Marshall and Mary when they hit trouble. In season 4 they're joined by detective Abigail Chaffee (Rachel Boston), Marshall's girlfriend who is extremely outgoing and friendly, much to the annoyance of Mary.

When off-duty, Mary is stuck dealing with her mother Jinx (Lesley Ann Warren) and sister Brandi (Nichole Hiltz), both of whom are shacking up at her house. Neither of them work, both have criminal records (and in Brandi's case, a criminal boyfriend pimping her out to sell drugs), and one wonders how Mary came to be such a law-abider with these influences. Her father committed crimes and left the family long ago, leaving Mary to be their "hall monitor." Mom and sister resent the hell out of Mary for this. There's also Mary's off-and-on fuckbuddy/boyfriend, a Minor Leaguer named Raphael (Cristian de la Fuente), who has more feelings for her than she does for him. Brandi rags on him constantly, yet is desperate to get into his pants.

As of the end of Season 2, Brandi is on again/off again with a self-made rich guy and taking classes at the local community college, Raphael is working for Brandi's boyfriend, Raphael and Mary are engaged and Mary has told him what she does. Jinx has gone sober (maybe).

During the third season, the origins of Mary and Marshall's partnership have been revealed to the audience, among other things. Season 5 (the show's final season) ended in 2012.

Marshall: Spending ten months undercover in a women's prison? I can think of worse.
Mary: You do know it's not all lingerie and pillow fights?
Marshall: But it is sometimes, right?