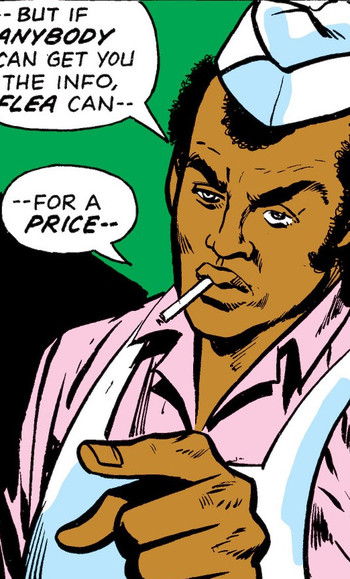 This is the character in Cop Shows, Detective Dramas, and Espionage Thrillers that everyone despises. Even the cops who make use of his services hate him. He is beneath the level of more dignified, "honest" crooks. He is a low level version of the Knowledge Broker; perhaps even the minion of one. But where a Knowledge Broker is high status and has an arbitrarily greater reputation, this character is just a stoolie. (This difference is sort of like the difference between a courtesan and a street-walker... they are both prostitutes, but one is considered "high class".)

The Informant lives in a miserable fashion selling information. But he is needed, so he is tolerated. Sometimes a sort of patronizing affection is granted him. In such a case, he is likely to be a Lovable Coward as well as a Lovable Traitor. Probably there are those who will not find him lovable...

A subtrope of Knowledge Broker. Mysterious Informant is a Sister Trope to, and The Stool Pigeon is a Sub-Trope of, The Informant. This trope may be averted entirely if a particular crime boss or criminal empire is considered too scary to inform on.

Not to be confused with 2009 Matt Damon film The Informant!, which is actually about a Stool Pigeon, kind of.

Owen reveals he has a tagger informant named Gooch who informs him of any graffiti in the park.

Owen reveals he has a tagger informant named Gooch who informs him of any graffiti in the park.