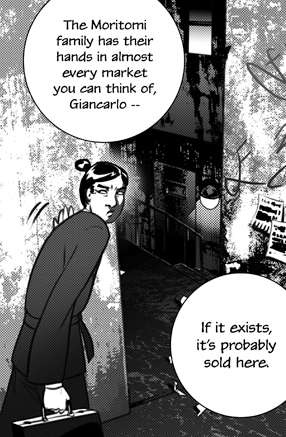 For a good time, enter the dark alley.
Every town in the multiverse has a part that is something like Ankh-Morpork's Shades. It's usually the oldest part, its lanes faithfully following the original tracks of medieval cows going down to the river, and they have names like the Shambles, the Rookery, Sniggs Alley... Most of Ankh-Morpork is like that in any case. But the Shades is even more so, a sort of black hole of bred-in-the-brickwork lawlessness. Put it like this—even the criminals were afraid to walk the streets. The Watch didn't set foot in it.
— Guards! Guards!, Terry Pratchett
Advertisement:

In the setting of a large sprawling Metropolis, there is always a certain spot that contains the dark side of city life. It will be the place where the police rarely tread and where those who attend to certain unsavory professions rely on their own methods of protection. It will have its own nickname from the locals, it may even be marked out on the official map, and any recognised Thieves' Guild is likely to have its headquarters around here. Its level of actual malice may vary; it could be a terrifying, silent place where the protagonist is in constant danger for each moment that they spend in this dark corner, or it could be a rather lively and cheerful area with an active Black Market that forms an actual market and where gamblers, whores, and dealers collect for decadent revelry. The latter is more common when The City Narrows are the Not-So-Safe Harbor district and are thus filled with pirates' and sailors' entertainment in levels that would make Frank Miller blush.

It will also manage to be made entirely of back alleys that seem to only back onto more back alleys. It is basically the back alley of the entire city which is what distinguishes it from the Wretched Hive: the Wretched Hive is an entire locale of crime and vice but the City Narrows is the subsection of the city that you can accidentally wander into from the nice side, if you walk too far along the Wrong Side of the Tracks (however, as in the above example of Ankh Morpork, a Wretched Hive can still have a Narrows area if the subsection manages to be even worse than the rest). So you can expect plenty of "What's a nice girl like you doing here?"

A subtrope of Wretched Hive and Wrong Side of the Tracks. It was Truth in Television back when the Kowloon Walled City existed until 1993 when it was demolished to build a large city park, and it still is to a degree; that degree being how much you can tell the inhabitants of a real-life version of this trope that they live in their city's arse end and not be given a Glasgow Grin.