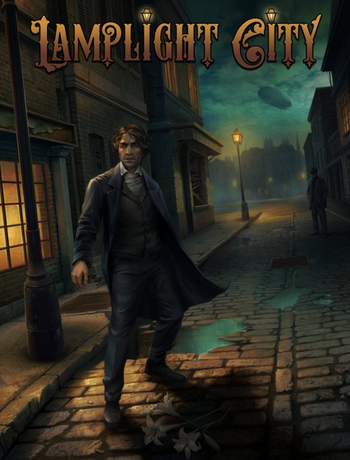 Lamplight City is a Point-and-Click Alternate History Adventure Game developed by the indie developer Grundislav Games and published in September 2018 for PC by Application Systems Heidelberg.

The story is set on alternate 19th century Earth that incorporates Steampunk elements. In this timeline, the American revolution did not happen, resulting in the North American colonies remaining a part of the British Empire and eventually developing into a nation called Vespuccia, that has retained many elements of British culture, including currency and political systems. This world's version of the Industrial Revolution was also more advanced and resulted in the development of "steam-tech" that included automated machines and airships.

The plot takes place in year of 1884 in the port city of New Bretique, where two police detectives, Miles Fordham and Bill Leger, investigate a case about a rather strange burglary of a flower shop in the run-down district of Cholmedeley. The seemly innocuous case suddenly quickly escalates to a hostage situation, and then culminates in Bill's death. In the aftermath, Miles finds himself burdened by guilt over having been unable to save Bill, but more eerily, his deceased partner's voice has begun speaking to him inside his head, always urging him to find the burglar who caused his death. Now retired from the force, Miles continues to work as a private investigator, doing several jobs fed to him from a contact at the police while hoping to find the thief of these Easter lilies, and perhaps bring closures to others as he does so. But can he solve the mystery, before his slowly fraying sanity gets the better of him?

Following Miles over five different cases, the game is quite open ended. Each case requires the player to gather clues from crime scenes, interrogating suspects, and make deductions based on the evidence available to them. But amongst the clues are also several false leads, some more subtle than others, and the player can freely pursue these too, which can potentially lead Miles to accuse the wrong people or otherwise render the case unsolvable. But a case ending up in failure doesn't result in a Game Over though; the plot advances, whether Miles finds the right answers or not, and the outcomes instead influences the overarching story in different ways.

A sequel of sorts, Rosewater, which is set in the same universe and going for a Cattle Punk motif, is currently in development and slated for a 2022 release.