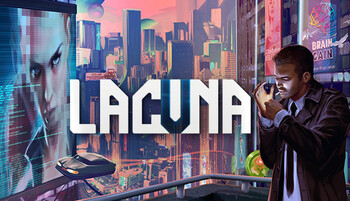 Lacuna is a Sci-Fi Noir Adventure Game, developed by the Germany-based DigiTales Interactive, and released in May 2021 for the PC, and for the Nintendo Switch in December 2021.

For several decades, the human race has slowly, but steady been colonizing the Solar system, expanding outwards from their planet of origin, know as Ghara. This process has been far from painless, having been marked by strife and unrest, especially between the Federation lead by Ghara and New Jordan, the only planet that has so far been successful in declaring its independence from the Federation, and has even been able to set itself up as as the only other superpower in the solar system. Recently, the discovery of tyllanium, a rare mineral that has proved crucial in the development new innovative technology, has lead to increased competition between the Federation and New Jordan, as they struggle to outmanoeuvre each other in taking control of the few tyllanium deposits. Matters have not been made less complicated by the fact that Drovia, a colony controlled by the Federation, and the home of the largest known quantity of tyllanium, has started to agitate for its independence, demanding the right to determine its own fate on the solar stage. Ghara not being ready to grant Drovia independence and thereby letting go of its precious tyllanium, have caused tensions to inflame. With neither side willing to budge, and with rumors about a possible Drovian revolt in the near future and that New Jordan is poised to come to their aid if it were to happen, many fear that an interplanetary war is forthcoming.

Chaught in the middle of all this is agent Neil Conrad of the Central Department of Investigation (CDI), the main federal authority in charge of investigating major crimes on Ghara. When Joesph Banny, Drovia's foreign minister, is suddenly assassinated mere hours before he was supposed to meet with the Federation's president to discuss a diplomatic solution to their disagreements, Conrad and his partner, Gary Long, is put in charge of the investigation, and must race against the clock to solve the crime before tensions boil over; something which could easily start a devastating war. Along the way, Conrad uncovers a conspiracy that forces him to come up close of the darker and more rotten parts of the Federation, and seriously challenges his convictions.