Cyberpunk with a Chance of Rain 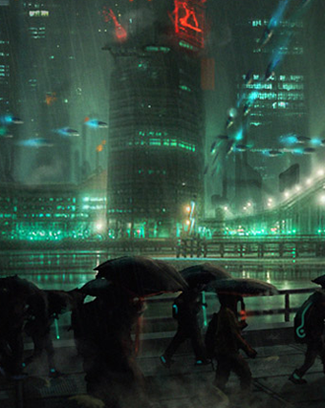 "The sky above the port was the color of television, tuned to a dead channel."
— Opening line of Neuromancer note Keep in mind that this refers to the grey static of older analogue televisions, not the solid blue or black of digital ones.
Advertisement:

Ever noticed how the weather is always lousy in Cyberpunk settings? Whenever it's not pouring cats and dogs, the sky is overcast with dark, pollution-laden clouds that barely let any sunlight through.

Inherited from the similarly crappy weather of the Film Noir genre, dark weather has the benefit of making the bright lights and advertisements of a futuristic city stand out, as they reflect off rain droplets and puddles. By contrast, the resulting damp and lack of color gives the street level a very downtrodden, dirty look, particularly where The City Narrows and the high-tech infrastructure is decayed and rusted. Also like Film Noir, works involving these kinds of weather patterns will nearly always take place at night.

Often overlaps with Industrial Ghetto. Compare City Noir, Gray Rain of Depression and Partly Cloudy with a Chance of Death.