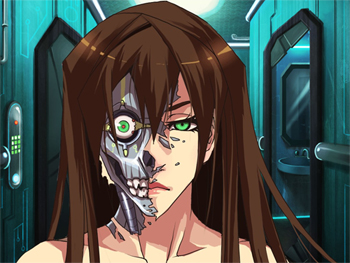 By 2099, global warming has transformed Earth into a Single-Biome Planet where it is always raining, and the environment has been destroyed. People are forced to eat flavored foam because animals cannot be raised and crops cannot be cultivated.

Luke Black is a successful programmer and bioengineer for Nanotech in London. Apart from his stellar programming skills and relative wealth, Luke is an average guy experiencing relationship problems with Helen, his fiancé, while trying to maintain his friendship with Tom, his best friend.

One night, an android named Tanya arrives at Luke’s apartment and demands to be let in. Tanya is on the run from her creators and the police, and needs Luke’s help in discovering why she possesses memories from the early 21st century. Around the same time, Luke is offered a top secret position at his company to work in the laboratory developing parts for androids.

Bionic Heart is a Sci-Fi Visual Novel created in Ren'Py by Tycoon Games/Winter Wolves, fully voiced with 24 endings. Download the demo or purchase it here