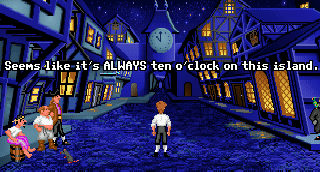 Creepy!
"I think nighttime is dark so you can imagine your fears with less distraction."
— Calvin, Calvin and Hobbes

A setting where it is always night. Whether this is natural or not largely depends on the setting. The night might be caused by a magical curse, geological reasons, or maybe time has inconveniently stopped while it was dark out. A Tidally Locked Planet would usually be this on one side.

Haunted settings are most likely to be used in this environment. Places such as Big Boo's Haunt, Hell Hotel, Haunted Castle, Haunted House, Überwald, and Halloweentown may never see the light of day, which suits their undead inhabitants just fine. Because Evil Is Not Well-Lit, Mordor can be this, often caused by choking sulfuric clouds or pollution. If this is caused deliberately (such as by a villain) during the story, as opposed to having always been the case, that is The Night That Never Ends.

Can be pared with Dramatic Thunder, Grave Clouds, Nocturnal Crime, Frequently Full Moon, and Weird Moon. Cue the Sun may be used as a way of ending works with this trope. Compare City Noir, Neon City, and Punk Punk settings, which aren't literally always night, but are almost never shown in the daytime. The Inverted Trope is Endless Daytime.