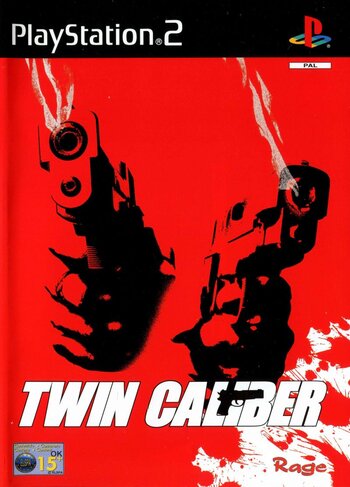 Let it rip! note  Also believe it or not, the game's actually bloodier than the front cover would like you to think. Really.

June 2003:
Since the arrival of a mysterious young woman in the small town of Sweet Liberty, rumors have spread among the town's folk...
There have been many strange and disturbing encounters, and there is talk of a sinister cult developing.
One month later...
All hell has broken loose.

… and that's when the awesomeness ensues.

Twin Caliber is a 2002 open-world Run-and-Gun action game made by Rage Software, and one of the company's last releases prior to it's 2003 bankruptcy.

A zombie outbreak had occurred in Sweet Liberty, a sleepy, rural town somewhere in the States, with most of the citizens mysteriously converted to the living dead. The town's sheriff, John T. Fortman, barely managed to survive the undead onslaught, and when every officer and upholder of the law within Sweet Liberty has been massacred by the undead, Fortman eventually decide to rely on desperate measures - by releasing Valdez, a convicted murderer and death row inmate (one put in behind bars by Fortman himself, no less) - so they may work together and investigate the source of the outbreak.

The game was originally made for various consoles, but only managed to gain a PlayStation 2 release because of Rage's financial issues.

Let's get it on, Junior.

Valdez: Shall we entertain them?
Fortman: It would be rude not to.
[cue gunshots]