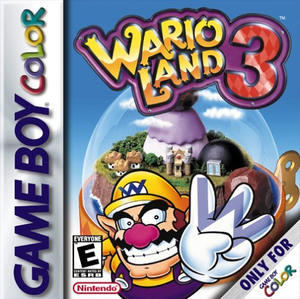 Wario Land 3 (subtitled The Mysterious Music Box in Japan) is the third game in the Wario Land series (not counting Virtual Boy Wario Land), released in 2000 for the Game Boy Color.

While Wario is riding in his airplane over a forest, its engine randomly explodes, causing him to crash in the middle of said woods. While looking through the first cave he sees for help he finds a music box just lying about, only to be warped inside when he picks it up. There he wakes up inside a temple and meets a hidden figure, who tells him that he was once the god of the world within the device—until the day an evil being arrived, stole his power, and sealed it away in five smaller music boxes. The figure asks that Wario track down these relics and restore them to the temple; in exchange, he will not only help Wario return to his own world, but also let the antihero keep any extra treasure he finds along the way. The greedy Wario agrees and immediately sets off in search for them.

Wario Land 3 borrows a lot of its gameplay from Wario Land II—being impossible to killnote with one exception, using enemy attacks as abilities, and sharing a lot of the normal abilities. However, Wario Land 3 takes an even less linear route: Instead of challenging you to reach the end of each level, some of which have alternate routes, Wario Land 3 challenges you to find the four keys and chests of every level. However, the vast majority of chests (and levels) are inaccessible at the beginning, forcing you to collect treasures to unlock more. Thus, Wario Land 3 is less about figuring out how to beat levels and more about exploring through levels, searching for treasures you can collect.