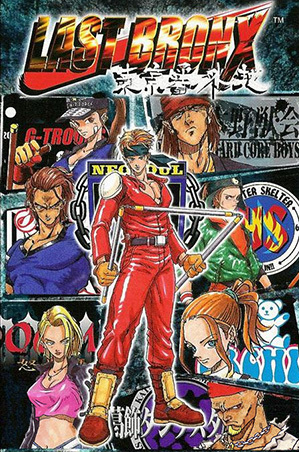 Last Bronx ~Tokyo Bangaichi~, often shortened to just Last Bronx, is a weapons-based 3D Fighting Game developed by Sega AM3 for arcades in 1996. It was ported for the Sega Saturn in 1997 and the following year for PC. It was later ported to the PlayStation 2 in 2006 as part of its Sega Ages 2500 lineup to celebrate the 10 year anniversary of the game.

The game takes place in a fictionalized dystopian version of modern-day Tokyo, Japan (sometimes referred to as "Neo-Tokyo"), where the burst of the bubble economy and following recession in the early 90's gave rise to crime, gang warfare and violence, leading to the first All-out Street War. One day, a gang known as "Soul Crew" stepped in and put an end to the bloodshed through fair-handed dealings and raw muscle. The peace was short-lived as the leader of the Soul Crew was mysteriously murdered, destroying the balance of power which led to a second All-out Street War. At the peak of the fighting, a gang called Redrum issued a challenge to every major gang in Japan to put an end to the violence through a fighting tournament, which would also determine which gang would reign supreme over Tokyo. While the challenge was shrugged off by the other gangs as a joke or trap set up a rival gang, things changed when they found their members floating lifeless in Tokyo Bay. No one would be allowed to refuse the invitation.

Last Bronx was developed by Sega AM3, whose recent hits at the time included the first Sega Rally and Virtual-ON. While the game shares some similarities to AM2's Virtua Fighter with an identical button layout, the game was unique in that each character fought with their own unique weapon and was one of the first 3D games to fully utilize motion capture along with Bandai Namco Entertainment's Soul Edge. Unlike many other weapons-based fighters at the time, which took place in fantastic or historical settings, stages in Last Bronx took place in actual and familiar places in Japan. Fights were short, brutal and not nearly as flashy as its weapons-based competition, but had a surprising amount of depth that emphasized combos, air juggles, and cancelling and feigning attacks by guarding. Fights took place in walled arenas, and the stage barriers could jumped on and be used to attack.

Unique to the Saturn and PC versions was a story mode where the final fight was instead against the character's rival. It also included an intro FMV, animated by TMS Entertainment under their Telecom label, who also animated each of the character's endings in the story mode. Exclusive to the Japanese Saturn version was a second disc that featured extensive tutorials explained by the cast in something of a classroom format. The Sega Ages 2500 version omits these, but introduces several video options and different play modes, such as having big heads and weapons, a homerun mode that would launch opponents high into the air, and more. All of these retain the arcade game's 60 frames-per-second gameplay, and while the Saturn version does have graphical glitches at times, it was otherwise hailed as an "arcade-perfect" port on par with the Saturn port of Virtua Fighter 2.

The game follows the leaders of eight gangs:

A product reflective of Japan's mood and culture at the time, Last Bronx was a huge hit in Japan and expanded into various other mediums including manga, comics, radio dramas, a novel, and even a live-action Direct-to-Video movie. The game was also praised for its social commentary that resonated with Japanese audiences, such as Lisa's backstory of being mixed Japanese-American, a product of a teen pregnancy who was later abandoned by her mother. Unfortunately, the impact of this was completely lost on international audiences when it was released overseas, and didn't find success in arcades or the Saturn in those regions. Despite its success in Japan, a sequel never surfaced, and the game stands out as AM3's only fighting game of this kind.

Not to be confused with the films Rumble in the Bronx or A Bronx Tale, which actually take place in the Bronx.