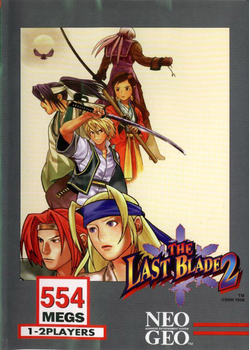 This history has not yet ended.
Advertisement:

Long ago, in a distant land, death was unknown to the world. Eventually, however, death first showed up, and with it, the "messenger from afar." The cause was found to be "Hell's Gate," and a sealing ritual was performed to keep the dead behind there, thus creating the two worlds. The Four Gods keep a constant eye over the gate. Eventually, Shinnosuke Kagami (Suzaku's earthly avatar) becomes tired of how foolish and weak people have become, and decides to take advantage of the power of the gate for himself.

Meanwhile, three adopted children of a great swordsman, Kaede, Yuki and Moriya Minakata, find their lives in turmoil. Kaede and Yuki, off on an errand, return to find their father dead, Moriya standing over his corpse. Kaede, assuming that it was Moriya, attacks him. Moriya takes the beating without fighting and walks away afterwards.

Kaede, feeling that he was too weak to help, goes to train with the old hermit Genbu Okina, and discovers that he holds the power of Seiryuu. He eventually fights with Kagami, and not only defeats him and saves the world, but also discovers that Kagami is the true killer of his father.

In the second game, the Hell's Gate is still wide open and to seal it for good, the 'Sealing Maiden' is required to sacrifice her life. Kaede, Moriya, Yuki and Okina tried to search for this Maiden, with several surprises in tow. A madman called Setsuna, who claims to be a "Messenger from Afar," wants to kill everyone, and the trio's master, Gaisei, was reborn into Kohryu and is plotting to open Hell's Gate as well as let spirits akin to Setsuna enter the world. Luckily for Kaede, not only is he the Seiryuu power holder (Okina's obviously Genbu), the Heavens has sent back Kagami to the mortal world, on the humans' side in a Redemption Quest, and the holder of the Byakko's power, Naoe Shigen, previously Brainwashed and Crazy by Kagami, is now also back to his senses and the formation of The Four Gods power holder are complete. Unfortunately for Kaede, the Sealing Maiden is actually Yuki and she resolves to sacrifice herself.

The Last Blade (in Japanese, Bakumatsu Roman: Gekka no Kenshi, "Tales of the Shogunate's End: Moonlight Swordsman") is a cruelly short-lived (two games in two years total, NGP ports notwithstanding) Fighting Game series developed and published by SNK in the late 90s — their prime. Seen by many as a Spiritual Successor to the Samurai Shodown series, LB still managed to stand out with its melodramatic aesthetic, extremely smooth animation and two modes of play (Speed and Power). However, the games have a mixed reputation, while their aesthetic and animation is top noth, both games, especially The Last Blade 2, have a reputation of being quite broken in Tournament Play.

In October 2020, SNK announced that an officially-sanctioned web comic adaptation of the first two games would be released, spanning 2 seasons of 12 episodes each. In addition, Hibiki Takane, the Breakout Character from the series would be featured as a Guest Fighter in Samurai Shodown 2019.