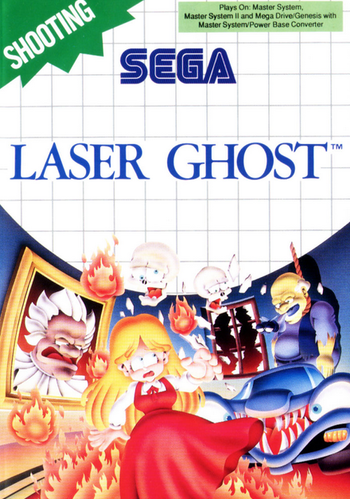 Largely forgotten arcade game by Sega, Laser Ghost is a shooter that tells the story of Ghost City, a ghost town that appears every 13 years and demands sacrifices of young virgins. This time poor little Katherine is kidnapped by a demon, but luckily three young guys (Bill, Max and Carol) are there to save the day and rescue Katherine before she is sacrificed.
Advertisement:

The game appeared in the arcades in 1989, it was a first person shooter with an horror theme which could be played by up to three people, well before House of the Dead. In 1991 SEGA ported the game to Sega Master System, but it was largely changed: gone were the three heroes, instead the player got to protect young Katherine, which was onscreen at all times, from various possessed stuff that appeared from nowhere and tried to kill her, by shooting them with the light gun of course.

Here a video of the gameplay.