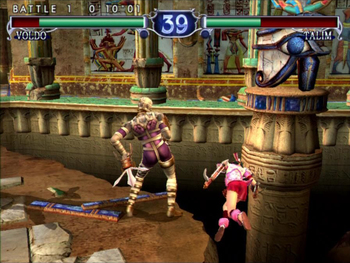 ...and she's not getting back up again.note It was a single-round match, after all.
Advertisement:

To win a match held in a bounded area by throwing, forcing, or tricking the enemy into stepping out of bounds, thus disqualifying them on a technicality.

Occasionally justified by the rules of the sport - but only a few Real Life sports use it. Another justification is to make the edge of the ring be a Bottomless Pit. The Ring-Out Boss is a subtrope of this where a boss in a videogame has to be defeated by a Ring Out. May or may not cause a Disney Villain Death.

King Hippo stumbles and falls out of the ring.

King Hippo stumbles and falls out of the ring.