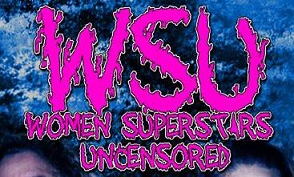 Women Superstars United is an all-women's independent wrestling promotion based in New Jersey that has been around since 1996, though few recognize anything prior to 2006 and its official establishment is recognised in 2007, when it changed from the male shows of Wrestling Superstars Uncensored to Women Superstars Uncensored. The promotion runs live events, iPPVs and has plenty of DVD material. The promotion was among those working in agreement during Dragon Gate's first attempt to establish itself in the USA and also claims to be "the leader of women's wrestling in the northeast". In contrast with SHIMMER which provides for itself by being family friendly, WSU features plenty of violence, blood and profanity (as the "Uncensored" part suggests) as well as having storyline based entertainment. Some of WSU's wrestlers have worked in WWE and TNA (and SHIMMER as well).

WSU's gender shift was followed by running more cards a year than any other women's promotion in the USA, though this approach was abandoned following their purchase by Beyond Wrestling and ownership transfer to regional rival CZW. After being supplementary to CZW and Dojo Wars for most of 2018, 2019 saw another Retool into Women Superstars United.