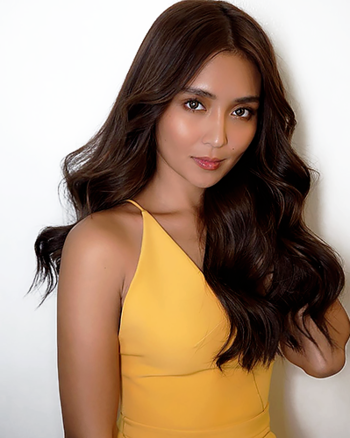 Kathryn Chandria Manuel Bernardo (born March 26, 1996) is a Filipina actress. Bernardo is the first and only Filipina actress who has headlined two movies that have breached the ₱800 million mark. One was for The Hows of Us in 2018, and the other is Hello, Love, Goodbye in 2019. Bernardo has also dethroned all prior “Box Office Queen” records within the Philippines.

Bernardo is a Former Child Star, her first acting credit being in 2003 when she was 7 years old. She later transitioned into Teen Idol status with Daniel Padilla; they were dubbed “The Teen King and Queen” due to their sheer popularity as individuals and an onscreen duo. They continued starring in Romantic Comedies/Dramatic Teleseryes as a pair well into their twenties, culminating in The Hows of Us, which became Philippine cinema’s highest-grossing film of all time in 2018. Bernardo’s first film with a Love Interest played by an actor who isn’t Padilla (Alden Richards), Hello, Love, Goodbye, broke that record in 2019. Despite no longer featuring in projects together, Bernardo and Padilla are still officially dating, and apparently have been since 2012.

Tropes that apply to her or are associated with her work include: