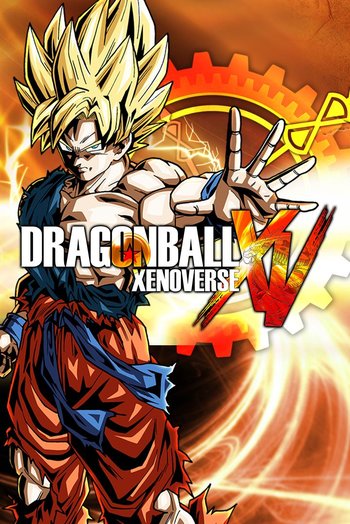 The hero is Goku? No, the hero is YOU!
Someone summons you from a land far away…Brave Warrior! Now, come forth!
—Shenron
Advertisement:

Originally known as Dragon Ball New Project, Dragon Ball Xenoverse is the fifteenth Dragon Ball fighting game released on home consoles since Dimps' first Dragon Ball Z: Budokai game, and the first fighting game developed by Dimps to feature full 3D battles similar to Spike Chunsoft's Budokai Tenkaichi video game series. Fighters can traverse the large, free-roaming stages that allow for fights on ground, air or water. Players can run when on the ground and swim while underwater as well. Dragon Ball Xenoverse has dialogue while fights go on, and fighters show facial expressions when they strike an opponent or take damage.

The plot of the game is that Future Trunks, who has now been hired as part of the Time Patrol, has noticed distortions that end up altering the timeline and changing what should have happened in the unaltered past. Seeking the strength to help him stop these mysterious changes, he gathers the Dragon Balls and makes a wish for a warrior powerful enough to help him fix the timeline - you!

One key feature in this game is the ability to customize your own characters any way you can. Players can choose to be Humans, Saiyans, Namekians, Majins and Frieza's race. You can choose to go through the campaign and help Trunks (in his Time Patrol attire from Dragon Ball Online) fix the timeline due to Towa and Mira's mistakes, or go online to Tokitoki City and fight/team up with friends for 1-v-1, 2-v-2 or 3-v-3 battles similar to Battle of Z.