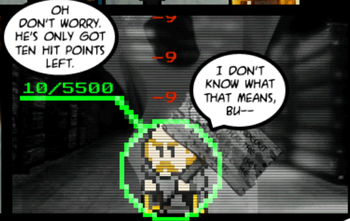 It means he's already dead.
"Vegeta! What does the scouter say about his power level!?"
— Nappa, Dragon Ball Z
Advertisement:

It's all well and good that characters with empathy or Super Senses can tell the fighting strength or Power Level of an opponent, and even get the heebie jeebies or outright faint when the penultimate evil shows up, but how do you transmit that to viewers without stilted dialogue and stentorian theatrics?

Whether it's thanks to a Robo Cam, a mystical talisman, or a cyborg eye, the character is privy to an Enemy Scan that shows their opponent's height, weight, age, fighting style, blood type and preferred brand of chewing gum. Expect any readings to be a Random Power Ranking; if the opponent is weaker, expect Trash Talking (and eating of crow once it turns out they're Not Left Handed) and if they're much, much stronger cries of "It's Over Nine Thousand!!!" with the prompt overloading of the device.

Stylistically, expect a circle around the target or a shaded silhouette, and an architects line (a horizontal line which then inflects at an angle to a box of text). Other than the raw power being in big numbers, all the other stats' and trivia is usually very small, possibly in alienese. If you're watching it on a DVD that can pause and Zoom it will be loaded with Easter Eggs. Rapidly fluctuating bar graphs happen too.

Newer videogames (including those based on Real Life or real history) will often have enemies' stats displayed when they are clicked, moused over or take a hit. This often comes in the form of a Hit Points bar above or around the crosshairs that changes appearance depending on the condition of the enemy. Older games and MMORPGs will have an enemy status display in the same format as the player's which appears in the same situations.

This is the Sci-Fi Counterpart of Aura Vision. See also Enemy Scan, Sensing You Are Outmatched, and Augmented Reality, ongoing Real Life research towards making this trope reality.

When characters unexpectedly gain this ability through magic or science, it's generally part of a Sudden Game Interface.