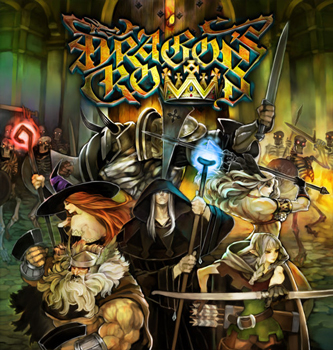 The motif within Dragon's Crown is all the fantasy works that have affected me until now: the PC RPG Wizardry that I first came into contact with when I was a student; Ian Livingstone's gamebooks; games like Tower of Druaga, Golden Axe, and The King of Dragons, that I was constantly going to arcades to play. If I were to take the time to mention every title, the list would never end. Because I had the time, I was able to inlay Dragon's Crown with such glittering treasures both as homages, and as an essence within it.
— Excerpt from George Kamitani in the official artbook of Dragon's Crown
Advertisement:

Dragon's Crown is a 2D Action RPG developed by Vanillaware and published by Atlus for the PlayStation 3 and PlayStation Vita in 2013. While Vanillaware's first game for an HD console, Crown is actually a spiritual successor to the 1994 arcade Beat 'em Up Dungeon Crawler, Dungeons & Dragons: Tower of Doom.

The game's premise is fairly simple: a group of heroes come to the kingdom of Hydeland in search of adventure, eventually uncovering the mystery of the eponymous Dragon's Crown and why so many want to possess it.

The game emphasizes Co-Op Multiplayer, with up to four players or CPUs at once venturing through the game's levels. Along the way players uncover weapons and other items to customize their heroes. Playable characters include:

These six are joined by Rannie, a thief who'll open chests and doors for you, and Tiki, a fairy friend who will help lead the heroes to possible secrets and point them in the right direction.

In 2018, the game received an Updated Re-release on Playstation 4 with Dragon's Crown Pro, which included upgraded graphics and a new orchestral soundtrack, in addition to cross-play with the PS3 and Vita versions.

There's an official manga adaptation of the game, as well as two chibi manga series which were serialized in Famitsu.

Tropes in Dragon's Crown include: