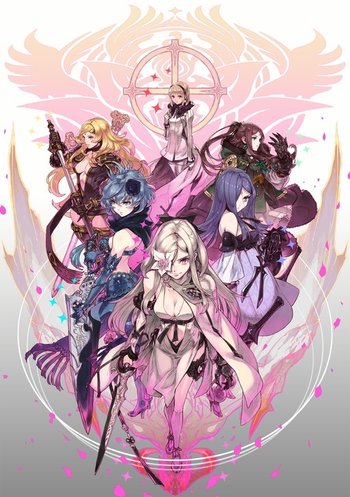 This is the story of six sisters, in a world protected by the power of song.
But one of these sisters seeks to bring about the world's ruin.
And she won't rest until all the others are dead.
Advertisement:

The third game in the Drakengard series, released in Japan on December 19, 2013. Along with the supplementary manga called Drag-On Dragoon: Shi ni Itaru Aka, it is a prequel to the first game.

Two years ago, the world was saved from the chaos of war by the appearance of the Intoners: five celestial sisters who used their incredible magical powers to unite the world and place it under their benign rule.

Peace would reign until Zero, an Intoner and elder sister to the five, suddenly embarks on a quest to murder her siblings so that she will be the only one left with their unique powers. Joined by a young and idealistic dragon named Mikhail, Zero aims to slay her sisters and claim their Disciples (male concubines) for herself. Like its predecessors, it features Multiple Endings, Hack and Slash action mixed with RPG Elements, and aerial missions.

And lots of blood.

Developed by Access Games, the game was directed by Yoko Taro and most of the team behind the original game. Consequently, the game's atmosphere is closer to the first game and NieR rather than Drakengard 2. While the game is still very bleak, it tries to lift the mood with comedic scenes and sexual innuendo.

The western version was released in May 2014.

Mikhail: So why don't you call me Mikhail, huh? Y'know, instead of "dummy" or "Hey, you" or... whatever?
Zero: You need to be a full-fledged dragon before I use your name.

And before the final boss...