This is the character page for all of the twisted but entertaining cast of Drakengard 3. For other pages in the Drakengard franchise, start here. For just characters in the first two installments, go here. Nier pages are thataway.

The game has been out for several years, so all spoilers will be unmarked, for both the game and its franchise. 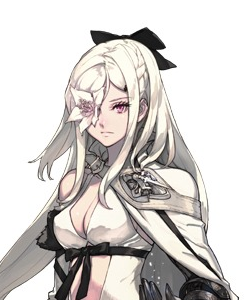 "Savage? I think you mean Intoner."

The eldest and most powerful of the Intoner sisters, who has a mysterious flower growing from her eye. Zero is now on a killing spree and relentlessly hunting her sisters. Zero has no tolerance for anything complicated and is very short-tempered. 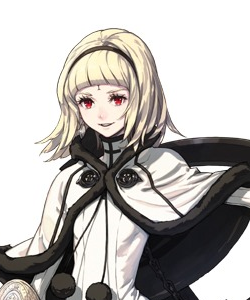 "You comprehend nothing! You destroy the peace we created! You kill your own flesh and blood! And then... you think... You think you can save the world!? "

The second eldest of the Intoners. She is intelligent, serious, and has a strong sense of order — Zero's polar opposite. It is due to her intelligence that she came to question how the Intoners came into existence and why they possess such godly powers. She decided to overthrow the despotic rulers of the world who had oppressed the people and create a new, peaceful world while ruling in their place. She leads the Intoners, save for Zero, who went rogue. Her senses are extremely sharp and grow sharper as time passes, and she prefers to isolate herself. 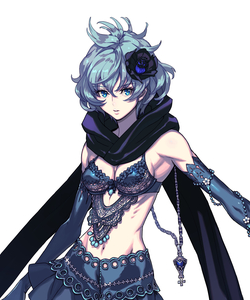 The ruler of the Land of Sands and the third Intoner. Her bright and cheerful personality allows her to befriend anyone, and she sets the tone for the Intoners. She is in love with Cent and openly displays her affection for him regardless of the settings or situation, much to the annoyance of those around her. 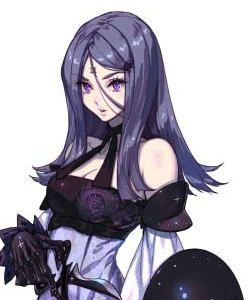 "I like dolls, but I also like scissors. I love everything about them: the snick-snick as they cut, the crunch you feel in your hand. I have so much fun when I cut my hair that I end up forgetting to eat."

The fourth of the sister Intoners, she rules over the Land of Forests and has a fan-following amongst some of the soldiers under her command. Lazy and apathetic, she hardly cares for things that don't pique her interest, but becomes completely obsessed with anything that does. She seems non-violent, stubbornly uninterested in Zero's battle with her sisters. 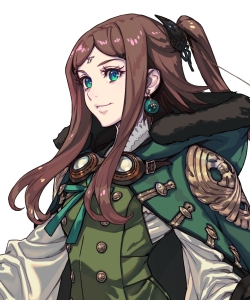 "Zero, please! Snap out of this! Where's the kind, gentle Zero I once knew?"

The fifth Intoner sister and ruler of the Land of Mountains. At first, she comes across as the most reasonable and noble Intoner of the five; however, she actually suffers from a crippling inferiority complex and detests the strengths of her sisters. To cope with this, she represses her true feelings and puts on an act of saintliness designed to give her the moral high ground. As part of this, she vehemently denies her own sexual desires and has vowed to remain a virgin. 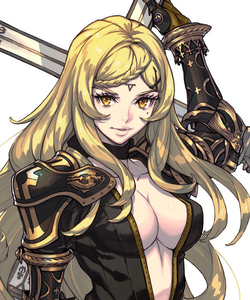 "Please touch my breasts, it's good for their growth."

The youngest Intoner and ruler of the Land of Seas. Extremely confident and greedy, she desires all that she sees, but quickly loses interest once she gets it. She purposefully uses risqué language during conversations and loves alluding to her nightly escapades. Her seemingly endless greed goes so far as to lust after her sister, Zero. 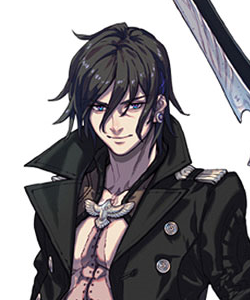 "It's pretty simple, really. All I do is put my nose to the grindstone and follow orders."

The Disciple of Two. A narcissistic disciple who fights with twin swords. Though he possesses supreme confidence, he’s actually quite dumb. Every bit of trivia he reveals is wrong, and his mistaken information constantly annoys his companions. 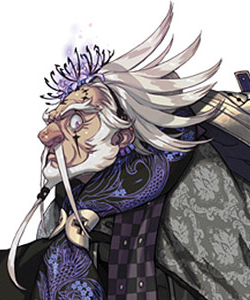 The Disciple of Three. An old-looking disciple who fights with special ring weapons, known as chakrams. Despite his appearance, he has a whimsical air about him and boasts a seemingly insatiable sexual desire. It is said that his pride and joy is the longest of all the disciples and he's fine so long as there's a hole nearby. 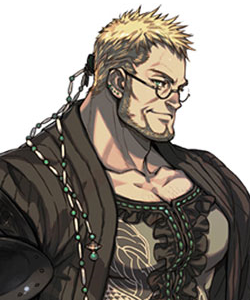 The Disciple of Four. A well-muscled disciple who fights with his fists. He is well-mannered and a perfect gentleman around women and appears to be the most normal of the disciples. However, he is an extreme masochist who perceives any torment or adversity as a reward. He's tried to conceal his masochistic tendencies, but everyone is well aware of his true colors. 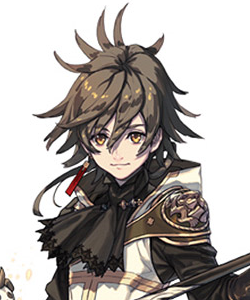 "Hey there, don’t get too excited!"

The Disciple of Five. A spear-wielding Disciple who can only find beauty in reprehensible things (and vice-versa). As such, he feels weary of the world and longs for a place where his unique viewpoint can truly belong. He vents this frustration by taking joy in senseless violence and death, and through his sardonic wit. 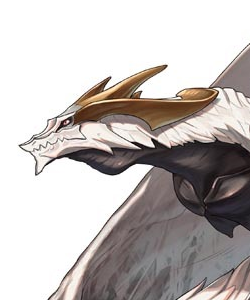 Michael is Zero's dragon partner, known as the strongest dragon. Proud and intelligent, he has saved Zero countless times with his strength. He gets killed in the beginning of the game but is reincarnated as the childlike Mikhail. Mikhail, unlike other dragons in the series, is an idealistic pacifist who believes that anyone can understand one another as long as they are willing to talk to one another. 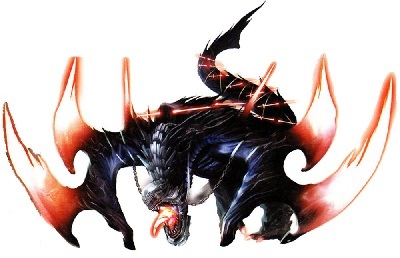 The dragon of One, who has been turned into a Daemon Dragon by the events of the game. Gabriella first meets One in the prequel manga, Utahime Five, and after various events ends up in a "Pact" with One. 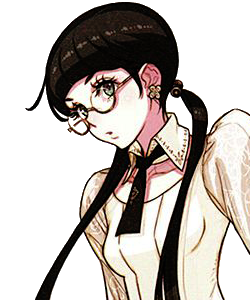 A mysterious girl who functions as the game's shopkeeper and sidequest giver. She pops up at various points in the story. She seems to know a lot about what's going on. 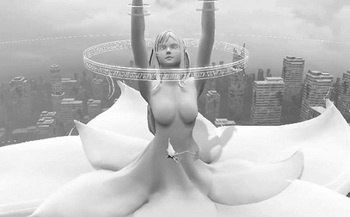 A parasitical Eldritch Abomination that is the source of all Song Magic. It takes the form of a flower and was created by Jerkass Gods to destroy the world. 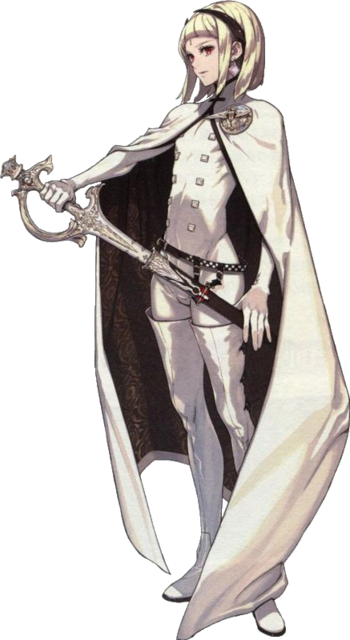 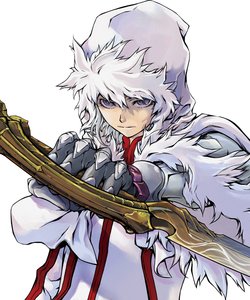 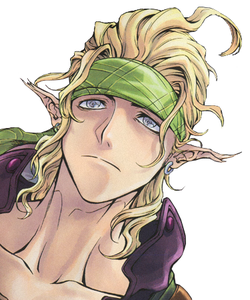 “You know what? I hate men who can't stop yapping.”

An elf that hangs around with Male One. Expert archer. Loud, cocky, and sadistic. He enjoys the suffering of humans and longs for their genocide.

King of Caerleon and Caim's father. 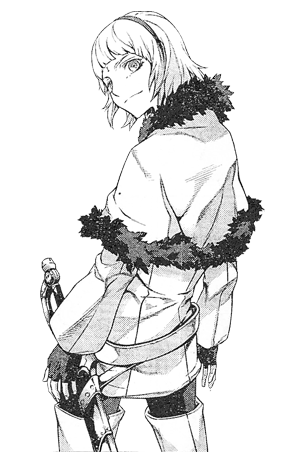 The Intoner One, who has mysteriously revived after her death at the hands of Zero, and is able to control the Red Eyes. She's actually Nero's sister who took their village elder's brand (tattoo-like markings on the body that initiate magic) for her own purposes.