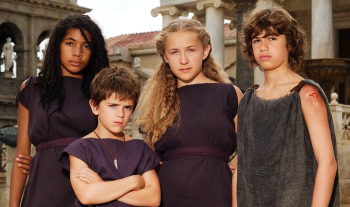 Four Kid Detectives.
A Gender-Equal Ensemble is an ensemble, team, band, family, or another group of main characters, consisting of at least four members, that has the exact same number of one gender as it does any other. This is normally done either for reasons of advancing gender equality, attempting to appeal equally to both male and female demographics, or for reasons of balance and symmetry.
Advertisement:

In a Family Tropes, this will often take the form of having a father, a mother, a son, and a daughter, so that each standard role in a Nuclear Family has a representative. If the characters are not related to each other, it can sometimes make it easier for each character to have a potential love interest.

Compare The Chick, Two Guys and a Girl, Two Girls and a Guy, Two Girls to a Team (when combined with a Four-Temperament Ensemble), Four-Girl Ensemble, and Masculine, Feminine, Androgyne Trio (an androgynous character rounds out the gender ratio in an odd-numbered group). Contrast with The Smurfette Principle, The One Guy, Chromosome Casting, Affirmative Action Girl, and Improbably Female Cast.