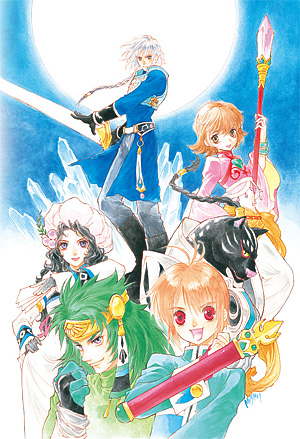 "Life doesn't have any one colour."
— Doctor Barrs
Advertisement:

Tales of Rebirth is the sixth mainline entry in the Tales Series. The game was released on December 16th, 2004 in Japan on the PlayStation 2.

It tells the story of a world where humans (Huma) and beastmen (Gajuma) co-exist in relative peace, having co-created the kingdom of Callegea long ago. Gajuma have the ability to use a magical power known as Force, which takes the form of a specific element or power depending on its host.

Our hero, Veigue Lungberg, was just a country boy living in the backwater village Sulz with his sweetheart Claire. That is, until the day that the Gajuma king of Callegea dies, triggering an event that causes Huma worldwide to suddenly develop the power of Force. Veigue gains the Force of Ice, which immediately goes berserk and freezes Claire in a tomb of ice.

One year later, he is visited by two travellers: Mao, a Huma with the Force of Fire and Eugene Gallardo, a Panther Gajuma with the Force of Steel. Mao manages to free Claire using his Force, but before they can get too comfortable she is kidnapped by a group of Kingdom soldiers. Veigue joins Mao and Eugene on a quest to rescue her and unravel the mystery behind the Force event. The plot later expands to involve Fantastic Racism and a good amount of Body Surfing.

Veigue later receives help from other characters: Annie Barrs, a girl with the Force of Rain and a vengeful grudge against Eugene; Tytree Crowe, a Hot-Blooded labourer with a sister complex and the Force of Wood; and Hilda Rhambling, a mysterious fortune teller using the Force of Lightning.

The game received an Updated Re Release on the PlayStation Portable, released March 19th, 2008 in Japan.

Unfortunately, even after the PSP port, this game has never seen the light of day outside of Japan. But at least Eugene is playable in Tales of The World: Radiant Mythology, and Annie is an NPC. And with the localization of Tales of Graces F, Veigue will also see a localized appearance. But hey, at least a Fan Translation project for this game is finally coming along, for the PS2 version (and possibly the PSP version, although there are a few technical difficulties on its side)!