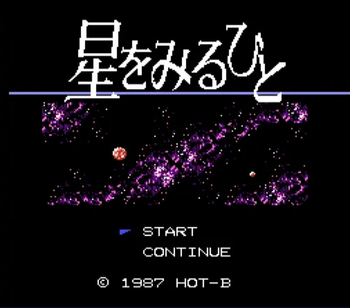 We now understand... how cruel the world can be.
It all starts in 1987. A company called Hot-B sees how well a certain little RPG is doing sales-wise, and decides they want in on that action. Taking inspiration from a PC RPG they made some time back, Hot-B hired a low budget company called Another. Another itself only consisted of one guy named Naoki Morishima (as listed here

), who created a science-fiction RPG known as Hoshi wo Miru Hito, translating as Stargazers. It's the gripping tale of a dystopian future, where an evil supercomputer known as Crew III has brainwashed the last of the Earth's population into subservient slaves, slowly driving themselves to extinction without realizing it. The only people immune to the treacherous computer's mind control are Psychics, who are quickly captured and killed by the computer's team of bounty hunters, the Death Psychics. All would be lost... were it not for the fact four psychics remain, four children with great power who are the only line of defense standing against the evil computer.
Advertisement:

Sounds thrilling, right? Well, hope you enjoyed that story, because none of it is ever brought up again in-game. As soon as you press start, you're in the middle of an empty field in the middle of nowhere, surrounded by enemies that can kill you in one shot. Oh, and you're at level 0 and can do about... 1 damage, if any at all. Good luck.

Hoshi wo Miru Hito is known as "densetsu no kusoge" (伝説のクソゲー), translating to "legendary shitty game"

, and for good reason. It would take an entire wiki (or at least a whole page) in and of itself to cover all the glaring flaws this game has to offer, but... that's how the Japanese fans like it. A patch was actually released to balance the game and improve the graphics, and there even exists not one, but two fan remakes, STARGAZER and Romancing StellaVisor respectively, that actually takes advantage of the story, adds some clever puzzles, and makes the gameplay more akin to the SaGa series.

In May 2020, it was revealed that the game would receive a digital re-release on the Nintendo Switch in the summer later that year, and was released worldwide on July 30th. Despite the worldwide release, the game was not translated, meaning it's only in Japanese.

All games provide examples of: