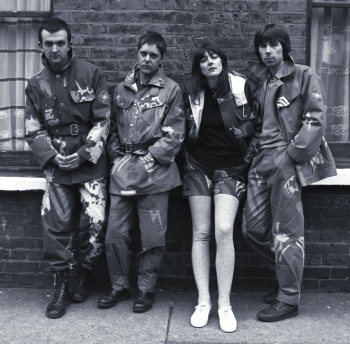 "Industrial culture? There has been a phenomena; I don't know whether it's strong enough to be a culture. I do think what we did has had a reverberation right around the world and back."
— Genesis P-Orridge
Advertisement:

Widely recognized as the Ur-Example and Trope Namer of the genre, Throbbing Gristle was an avant-garde industrial band from England, originally active from 1975 to 1981. They reunited in 2004, only to disband again in 2010 after the death of Peter Christopherson.

The group was notorious in the 70s for their transgressive, gruesome live shows and extremely dark lyrical content, which covered (among other things) serial killers, cynical political/social commentary, and feelings of angry helplessness that followed the 1960s; this effectively set the tone for future industrial bands, whose subject matter rarely strayed far from these themes. They also founded Industrial Records, the label which gave the industrial genre its name, and published many of its earlier exponents.