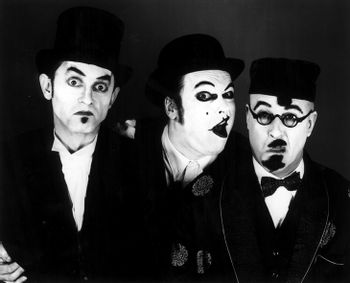 The Tiger Lillies are a three man band from Soho, London, UK. They sing about filth.

So... That's the short version. The long version is that the Tiger Lillies are a punk cabaret band led by classically trained falsetto/philosophy dropout Martyn Ja(c)ques, supported by two Adrians in silly hats: Adrian Hughes (on drums, toy cars and inflatable hammers) and Adrian Stout (on bass, theremin and backup vocals).

Their songs range from deranged screaming to touching sailor ballads, and their subjects are Played for Laughs and Played for Drama with equal abandon. The band isn't afraid to do cover songs, either. They have interpreted Jacques Brel, Kurt Weill, Stephen Sondheim, Frank Sinatra and the The Village People. They also have several Concept Album projects and shows: One based on Shockheaded Peter, one that's a parody of The Threepenny Opera, and an album with Edward Gorey's unpublished poems, created at the request of Gorey himself.

In the past few years, they've gone from piss-poor obscurity to international fame, playing high-end theatres all over the globe. Most recently, they were invited to play in Bertolt Brecht's own Berlin theatre — one of the very few occasions the theatre hosted anything aside from classical plays by its own ensemble. The band's celebrity fans include Matt Groening, Terry Gilliam, The Dresden Dolls, Franz Ferdinand (who attend their concerts when they feel like it), Marilyn Manson and Dita Von Teese (who used songs by the Tiger Lillies as their wedding music), and John Cameron Mitchell.

They have to be seen to be believed

Tropes that have shown up in their works include: