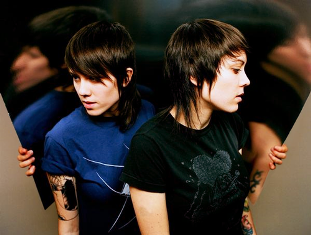 The twins began as musicians at about age fifteen, writing songs and playing guitar, and were able to record a few demo albums throughout their late teens, culminating in their first whole album Under Feet Like Ours, released independently in 1999, and they were placed on the figurative scene with their signing on by Vapor Records and the release of their second album, This Business of Art, the next year.

They'd prove to gain popularity two albums later (after If It Was You, starting with So Jealous,) and have come out with another five albums since then (The Con, Sainthood, Heartthrob, Love You To Death, and Hey, I'm Just Like You).

The two live and songwrite separately, each sister usually writing the music, and singing the melody to her own songs, which often results in their albums being interestingly divided stylistically in music and lyrics. In addition to their music, they're known among fans for their concert banter; approachable, likable, and very "real" personas; and, to a level, the fact that they're both lesbians.

These musicians provide examples of: