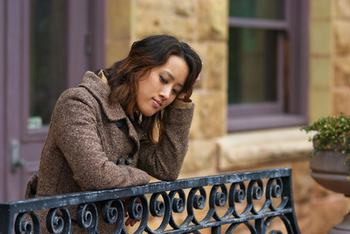 Blue, blue caravan,
Winding down to the valley of lights,
My true love is a man
Who would hold me for ten thousand nights.
In the wild, wild wailing of wind,
He's a house 'neath a soft, yellow moon.
So, blue, blue caravan,
Won't you carry me down to him soon?
—Vienna Teng, "Blue Caravan"
Advertisement:

Vienna Teng (born Cynthia Yih Shih, October 3, 1978) is a San Francisco Bay Area singer/songwriter who works in a style she likes to call chamber-folk. A classically trained pianist, she left a job at Cisco Systems to write and record music full-time. She has taken to touring in the past few years, often accompanied by professional percussionist Alex Wong, who co-produced Inland Territory with her.

She and her work provide examples of: