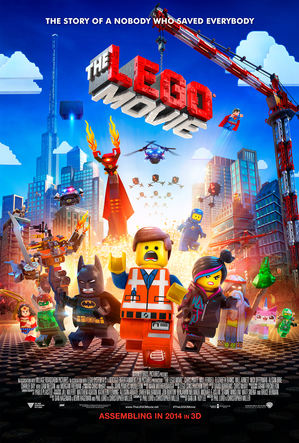 The greatest movie ever assembled.note Lord Business, Metalbeard, Wonder Woman, Green Lantern, Batman, Emmett, Wyldstyle, Vitruvius, Unikitty, Green Ninja, Benny, and Superman.
Wyldstyle: You found the Piece of Resistance, and the prophecy states that you are the most important, most talented, most interesting, and most extraordinary person in the universe. That's you, right?
Emmet: Uhhh... yes, that's me.
Advertisement:

The LEGO Movie is a 2014 CGI animated film (done in the style of stop-motion animation) directed by Phil Lord, Christopher Miller, and Chris McKay (Robot Chicken) based upon the LEGO franchise. Animal Logic animates the film.

In a universe made entirely out of LEGO bricks, Emmet Brickowski (Chris Pratt) is a perfectly normal, regular old construction worker. He lives everyday happy and upbeat, always making sure to follow the instructions. One day, however, he crosses paths with a strange figure by the name of Wyldstyle (Elizabeth Banks), and awakens with a mysterious object stuck to his back. This object turns out to be the legendary Piece of Resistance, which an individual known as "the Special" was foretold to find and save the world with. Unfortunately, this makes Emmet the target of Lord Business (Will Ferrell), the secretly evil ruler of the world who plans to end it using an immensely powerful weapon that can only be stopped by Emmet and the Piece of Resistance. Our hero is in way over his head, and thus seeks help from the old, wise scatterbrain known as Vitruvius (Morgan Freeman), as well as many other Master Builders, individuals capable of dismantling their surroundings to create just about anything they can imagine, and that's when things get real.

The film also features Will Arnett, Liam Neeson, Nick Offerman, Charlie Day, and Alison Brie as prominent members of its supporting cast. There are also scattered celebrity cameos among the LEGO figurines, such as Channing Tatum as Superman and Jonah Hill as Green Lantern. Cobie Smulders also gets a minor role as the first portrayal of Wonder Woman in a feature film.

A lot of the film's humor comes from jokes that can be done with LEGO Toys, like the similar LEGO Adaptation Game series — which even has a game based on this film, and whose director (as well as the director of most of the LEGO games) executive produced this film. It's also worth noting that this film is the first to come from Warner Bros.' Warner Animation Group division. Watch the first trailer here,

A sequel was released in 2019, and two 2017 spin offs; The LEGO Batman Movie and The LEGO Ninjago Movie. A television show spin-off centered around the Uni-Kitty character simply called Unikitty! had also been green-lit to air on Cartoon Network in 2017.

The funniest part is that despite claiming afterward to absolutely hate the song, she sings it better than anyone in the film.