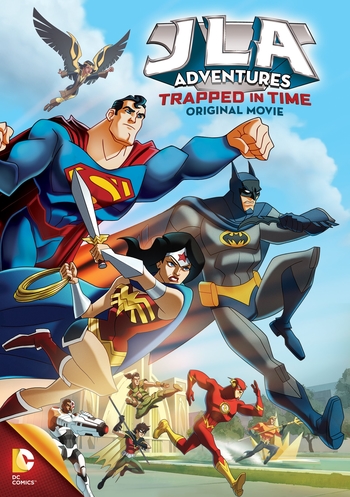 JLA Adventures: Trapped In Time is a direct-to-DVD animated film set in the DC Universe. The film features the Justice League of America attempting to Set Right What Once Went Wrong after Lex Luthor and the Legion of Doom travel back in time and prevent Superman from ever existing. Partnered with Robin, as well as Dawnstar and Karate Kid from the Legion of Super-Heroes, the remaining Leaguers are forced to travel through time and rescue their comrades. It was produced and directed by Giancarlo Volpe, who also worked on Green Lantern: The Animated Series.
Advertisement:

Set in its own self-contained Alternate Continuity, the film is a bit of an oddity since it wasn't released under the current standard DC Universe Animated Original Movies label. Instead, it was a store-exclusive item for the retail chain Target, at least for a few months until Warner Brothers gave it a wider release. Also unusually for DC animated films, it was only announced a month before it was released, making it sort of a stealth project. It came out the same month as Justice League: War, which is part of the label and got way more publicity at the time for beginning a series of New 52-based adaptations. The two DC films were noted for wildly contrasting tones; while War goes for a darker vibe, this is more like a modern Super Friends.