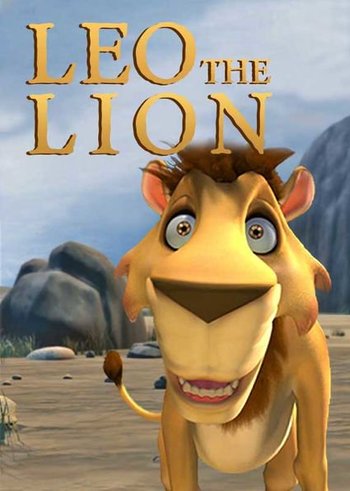 Apparently made by an Italian film company named Dujass Film in 2004 to 2006 (the exact date of the film's creation differ according to sources), and originally titled La storia di Leo, it was dubbed into English in 2013 and distributed onto Netflix by The Weinstein Company. It's also interesting to note that the subtitles for the movie appear to use a different script, like they used a literal translation of the original Italian film while the spoken audio is a localization.

It follows the story of Leo, a lion who happens to be a vegetarian. Within the first five minutes, his mother falls to her death while pursuing a zebra, this leads to his fear of water. Before she dies, she tells Leo to search out "The Heart of the Jungle". Ostracized and bullied by his fellow lions, he runs away from the plains to the jungle. During that time, he makes friends with an elderly antelope named Uncle Lope, who is also the movie's narrator.

One day he meets an elephant named Savannah who happens to be heavily pregnant. She tells Leo about her missing husband (named "Eli Phant") who went missing when poachers came to the jungle and supposedly kidnapped him. Uncle Lope then adds that he was actually killed by another elephant named Maximus (voiced by Matthew Mercer), who wants to marry Savannah himself and become King of the Jungle. Leo stays with Savannah after she gives birth to twins (who are connected via their tails). Savannah then sends Leo to find the Elephant doctor. A fire breaks out and Leo gets the idea to take the elephant twins to the Heart of the Jungle where they should be safe. Along the way they're accompanied by various other animals like a zebra foal, a leopard cub and a monkey.

Not to be confused with Kimba the White Lion's main character, who is called "Leo" in Japanese. Or the Metro-Goldwyn-Mayer mascot. Or the 1994 Direct to Video Leo the Lion: King of the Jungle.

Leo the Lion has examples of the following tropes: